This time I will try to explain how my MIDI drum trigger system works. As you might have seen in the videos (or live), I am trying to control as many functions as possible using my drumsticks, thus creating an interactive electronic instrument around my drumset.

While it will take a larger number of posts to get around the whole system, I want to give you an overview over the MIDI signal flow in my setup. The heart is definately the Nord Modular G2, where almost all the sounds and all the sequences come from. The drum triggers basically just control a modular synthesizer patch in the G2 that is  representing the composition, or the song. 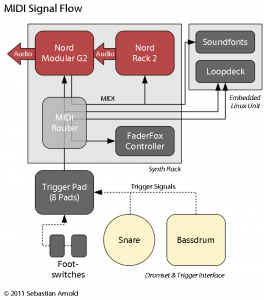 Let’s go through the components bottom-up:

This seems to be a really complex system, but it is very flexible and once I was getting used to it, I was able to perform pretty intuitively with the equipment. Of course, this setup changes and evolves from day to day, and it has been much simpler and smaller in the past.

One Response to Drum Trigger Setup