This week, we’re finally starting our one-man band double feature. Robin Sukroso is a musician who I’ve met some years ago at Hans & Gloria Festival, and we’ve played a couple of shows together. He plays a Breedlove Black Magic acoustic guitar which he enhanced himself with force-sensing resistor trigger pads (FSRs). Using these, he is able to trigger drum samples while playing guitar. Additionally, each string is generating MIDI data to play bass sounds from the computer. The whole concept is called “AcPad” guitar and will eventually go into production. There is an article on SonicState about an earlier version of the guitar here: ACPAD Guitar Combines Acoustic and MIDI.

We have recorded some songs which will be released this week bundled with Remixes by Powel, Jozak Sander and Calm Chor as 7inch Vinyl+Download Synchrotron E.P. (beeah–music BEH020). I was playing a hybrid drum kit consisting of trigger pads for electronic sounds together with an acoustic snare, hi hat and cymbals. As always, all my electronic sounds (drums, bass, lead synth, delay) are generated inside the Nord Modular G2. Be sure to check out the video of the first single “Role For Gold”:

Arnold+Sukroso will be on a double feature tour, starting this Friday (09.05.2014) with the release party at Ritterstraße 11, Berlin-Kreuzberg. We are playing both our electronic solo sets and an Arnold+Sukroso feature. Hope to see you there! 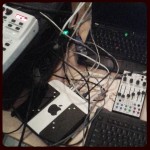 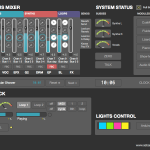 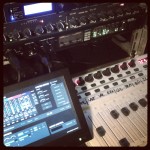 Today’s concert at Magnet Club will be the last one with the usual setup. There are a lot of new things coming up that will radically change the running system. The first thing to happen will be the shift of my whole audio processing to a digital mixer and an all-integrating Max patch. I’m also going back to the roots, revising my Wahan drum kit substantially. Last but not least, the live visualization of my music will expand with the possibilities of Max. If you’re a Berlin based artist and want to contribute, let me know.

At the end of this month, a new remix single is coming up, followed by a short Germany tour. [edit: you can get it now on iTunes and Amazon.] We shot a video last year, this is Filmarche 5773, directed by Anton Hempel, camera Michael Clemens, produced by Barbara “Bob” Voss, edited by Anton Hempel.

There will be more information on the single parts of my setup as soon as I got them running. See you all soon! 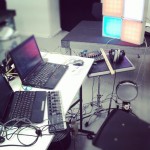 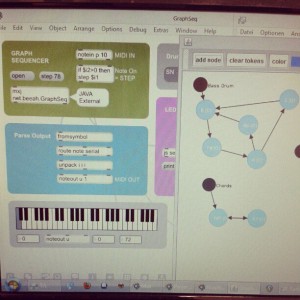